Traveling out of the United States always poses challenges, especially when part of the trip includes leaving a safe and secure cruise ship for the purpose of meeting a bonefish guide for a day on the flats of Grand Bahamas Island.

Tom Blake and his wife Davi and my wife Lauri and I embarked on a four-day cruise leaving from Miami which was scheduled to return in time for us to attend the National Championship football game to see our beloved Buckeyes capture the natural championship. When the Buckeyes were crushed by Clemson, we should have sensed that our fishing trip would also encounter a few challenges.

The girls scheduled the trip. I made arrangements for the bonefishing. As usual, the logistics made by the wives went more smoothly than mine.

I received a bonefish guide recommendation  from Andrew Bostick who provides our fishing group with terrific guiding in the Everglades during an annual November fishing trip for snook and redfish. He suggested that I contact the Pinder family who have been  bonefish guides in the Bahamas for generations. Several members of the Pinder family  were featured as guides for Tom Brokaw, Lefty Kreh and Huey Lewis (among others) on the TV production Buccaneers and Bones which has aired  for the last several years on the Outdoor Channel.

Our January 3 date in port at Freeport, Grand Bahamas, was open on their calendar and the booking was made. Jeffrey Pinder  arranged for a cab to pick us up  at  point of  disembarkation.

Part of the fun of any fishing trip is the preparation consisting of packing rods, reels,  and related tackle.  Although the Pinders would have been happy to rent us tackle, I love using my own gear and providing the equipment for any friend who I can talk into fishing with me. Every glance at each rod and reel floods my mind with memories of fish caught and fish lost.

Unfortunately, the  dockside terminal security guard was not impressed  by my need  to personally carry my fishing rods to my cabin during the process of clearing security as we boarded the ship. Our communication was marginal  at best.  When I explained that the contents  of my rod tubes  contained fishing rods and yanked the rods out of the tubes for a demonstration, she promptly  wrote  “fishing  wings” on the inventory tag .

In broken English, she informed me that my rods would be confiscated and later delivered to Guest Services on the ship. My confidence level that the rods would actually make that journey was quite low.  As I walked up the gangplank, I  cast several  worried glances toward my rod tubes which had been wrapped together with masking tape.

Once on board, I immediately asked  any crewmember who would listen about when my rods would be available. After hearing several different stories ranging from 5 PM that day to the last day of the cruise, a very helpful member of the crew staff told me to come back at 5 PM and discuss the matter further with Guest Services. I reappeared at 4:59 PM.

Corina was at the desk and informed me that indeed my rods had been delivered by  Terminal Security  to Ship Security . She had personally placed the rods under the Christmas tree in the back office. When I offered my opinion that  carrying the rods back to my state room would not be a burden, she  laughed. Corina told me that the rods would be available  after 6:30 AM the next morning so we could use the equipment on our trip .

I suggested that I would sleep better if she was on duty at 6:30 AM  the next morning.  She handed me her business card but would not promise  to be at work  at that ungodly hour.  Upon my arrival at exactly 6:30 a.m. the next morning, the Guest Services representative  on duty patiently listened to my tale of woe and disappeared in back for what seemed like many minutes. When he reappeared  with the rods, I was elated.

Tom and I met for breakfast at 7:15 as the ship  was to be cleared for disembarkation at around 8 AM.  As we headed to the bottom of the ship to exit, Tom realized he had left his sunglasses in the room.”No problem”, I said. “I’ll wait for you near the gangplank” Many minutes went by. Many more minutes went by. Finally, Tom approached the small hallway with a worried look on his face.

While accessing his room safe to get money for the fishing day, he inadvertently changed the combination to the safe and was no longer able to open it. After numerous failed efforts to reset the combination, he left the job of fixing that problem to his wife, Davi. She was up to the task.

From that point, the trip smoothed out. Within minutes of exiting the ship, our cabbie, Terrel  Lightourne appeared curbside. A delightful man dressed in a business shirt and tie,  Terrel had the cab parked behind our guide after a short 10 minute ride. The father of five  who is a lifelong resident of Grand Bahamas drives 45 miles from his residence on a daily basis to provide transportation services to the tourists visiting his island home.

Tom and I jumped out of the cab and approached Jeffrey Pinder with hands extended. Unfortunately, Jeffrey was really named David and after a brief embarrassed moment, handshakes were exchanged, rods were rigged, and the 15-year-old bonefish skiff was loaded with our gear and we were headed to the flats.

On the run out,  I asked  David if he is ever finished with the famous fly fisherman Lefty Kreh who appeared  on  several of the Buccaneers and Bones  episodes. Upon learning that he knew Lefty well, David and I decided that if Tom could accomplish the difficult task of catching a bonefish on his very first trip, he would deserve to share the revered fishing nickname of “Lefty”.

Tom graciously agreed to fish with me on this saltwater flats trip even though he is less than a fan of sharks which are often found prowling bonefish flats .His “reward” for bravery  was to stand on the bow  of the skiff first. Within 5 min.,Tom who had never cast to a bonefish or any other saltwater fish was attempting to catch the most challenging of all bonefish –  a large tailing fish which popped up just inches from the shoreline on the outgoing tide.

That chance did not work out well but Tom had two more decent shots at tailing fish. No takers even though he cast the  shrimp baited hook in good spots.David Pinder was full of encouragement and even as the spooked bonefish raced off the flat,  our guide assured us that here were more bonefish around and Tom would catch one.

After I took a turn on the bow with no luck,  Tom returned for an additional shot. Suddenly, David spotted three bonefish swimming slowly  down the mangrove shoreline. When the fish were in casting range,  David shouted ” Go”. Tom cast about 8 feet short of the fish David had spotted. Instantly,  a good  bonefish swirled with a huge boil on Tom’s shrimp and  the fish streaked off took off on a long first run with the drag on the spinning real screaming. Tom had obviously seen a different fish than David but the result was Tom’s first bonefish coming to the skiff after  a long and exciting battle. Tom was heard to  shout  a few excited profanities as he laughed with delight during his fight with the determined 6 pound bonefish!

For someone like me who loves bone fishing and knows how challenging catching this terrific fish can be, the thrill of being with someone who catches their very first bonefish   will be a lifetime memory. Tom’s smile tells it all. 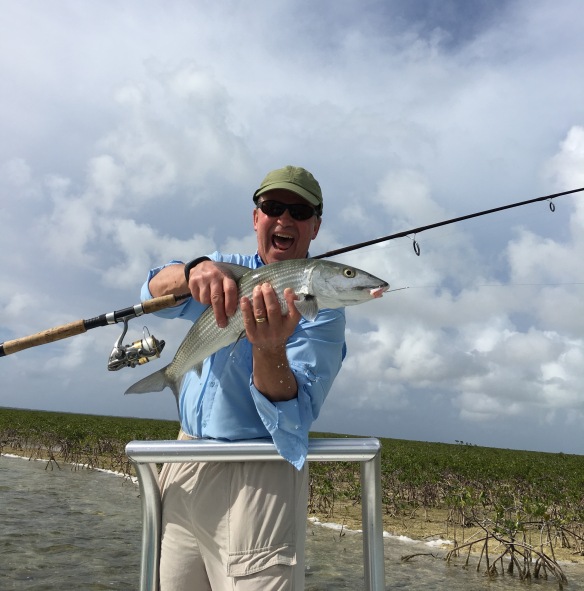 Tom Blake and his first bonefish

Welcome to the ranks of bonefishing, Lefty Blake!!!

On Monday morning, good friends Lee Mitchell, Bob Hamilton, Chuck Sheley and I will begin our annual November fishing adventure. We are off to the Swamp! The beauty of the Everglades cannot be over stated. Although blurry, this picture of flamingos in the wild was taken on a previous trip to the Everglades.

Our quarry will be the beautiful snook, bulldogging redfish, and there may even be a few tarpon around. The three year ban on keeping a snook due to a huge fish kill as a result of extreme cold in the Everglades has been lifted. So, if we are lucky, there may be a snook and redfish dinner some evening next week.

We have the good fortune of fishing with tremendous guides, Steve Huff and Andrew Bostick. I am quite sure they are not as excited about fishing us as we are about their being our guides! They will either pole or use their electric motors to direct the skiffs along oyster bars, mangrove islands, channels, and other fish holding structure. With the new moon we are hopeful that enough water will be moving to create tidal exchanges sufficient to encourage hungry fish to strike our plugs.

There will be some bugs, some plugs hung up in the mangroves, a lot of good-natured chop busting, and great camaraderie. If I can master a little technology as the week goes along, my hope is to do a brief daily posting with a little pictorial proof of our adventures.

I have one personal goal. Avoid falling from the boat into the water where alligators and sharks swim. I had two such mishaps last year. Although I am confident I will stay dry, Steve Huff did tell me during a phone call last week that he had stored a snorkel on the boat to make sure it is available for me.